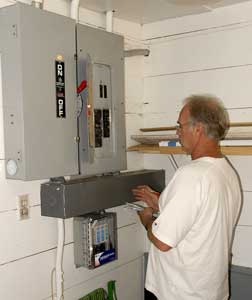 If you have invested a small fortune in state of the art electronics, and if you want the best possible protection for your investment, you need to have Illuminations Lighting Design come to your home and install commercial grade surge suppressors that will protect your entertainment, communication, and home appliance devices.  The whole point of having surge suppressors located at the main electrical service panel is to provide catastrophic event protection so that you will not lose money on valuable equipment and that your lifestyle will not suffer from a random surge of power.

Almost everything in your home needs surge suppressor protection.  We do not say this because surge suppressor companies are trying to sell their products and deck your home out with excessive technology.  Rather, our claim is based on facts that appliances today are both more sophisticated and more delicate than their 20th century progenitors and require a much more sophisticated line of defense to protect them against transient voltage surge.

For example, consider for a moment how sensitive computers have become and you will quickly see what we mean.  There was a time long ago when a computer was the size of a living room and ran on vacuum tubes so large people had to carry them with two hands.   The invention of the printed circuit board was a revolutionary change.  It allowed the computational mechanisms of computers to be shrunk down to a microscopic level so that computers could migrate into daily and professional lives as the constant companions they have now become to both socialization and professional labor.

Ironically, however, these very printed circuit boards made computers more vulnerable to electrical overload.  Miniaturizing a room full of equipment to a chip the size of a fingernail creates a great deal of vulnerability to even a small surge in voltage.  This is why, when we first began to use personal computers in the late 1980s and early 1990s we also began to use the first primitive surge suppressors.

While the desktop computer revolution was sweeping people away from balancing their checkbooks into new forms of space combat and auto racing, another revolution was quietly occurring behind the scenes.  This was a revolution in appliance manufacture.  Appliance makers began to put simple printed circuit boards in everything from microwaves to toasters to coffee makers.   While these were far more primitive than computer microprocessors, the basic functions of each appliance were so embedded on these cards to the degree that the core functionality of the device now became reliant on the circuit board.

Of course, this in turn made the newer, improved appliances more vulnerable to excess current in exactly the same way that computers had become vulnerable. Today, everything from computers, TVs, stereos, phones, fax machines, and even coax cable lines need the extra protection of commercial-grade surge suppressors to safeguard against the damage that can and will often result from transient voltage spikes.  Of course, you can take your chances on protecting your plasma flat screen with a retail surge suppressors if you like-but this is not really a good idea.

This is due to the fact that there simply is no way for retail-grade surge suppressors to anticipate and counteract the force of many of the more powerful spikes in current.  There are two sources of excess current that we need to be aware of: lightning, and transient power surge or TPS.  People often assume that the only danger from lighting is the danger of a direct strike to the home.  In actuality, lightning poses far more of a threat if it hits a nearby transformer and creates a high-voltage transient power surge.

Surges of this kind can literally blow out every appliance in the home, including climate control systems.  Retail surge suppressors will not withstand the force of the more powerful surges.  More subtle forms of  TPS exist as well that can be equally as menacing and virtually impossible for retail surge suppressors to detect.  These surges are caused either by fluctuations in the power grid or by mechanical motors operating within the home electrical systems.   As motors draw power from the grid, they can draw too much at moments when they mechanically fluctuate and thus pull too much current into the home wiring system.

This is why commercial grade whole house surge suppressors are needed.  The ability to monitor these sudden spikes in voltage is called excess current detection, and it provides a first line of defense against high voltage variance and properly counteract them is the best way to prevent damage to home equipment.  In a sense, a commercial surge suppressor almost feels a spike coming and counters its force with an appropriate level of protection.  While this does not provide a 100% safeguard against catastrophic failure (what does?), it is certainly the best anyone can hope for all things being considered.